Santa Shortage: A Head Elf weighs in on holiday headache

manonallard/Getty Images(NEW YORK) -- As the night before Christmas inches nearer, Santa Claus is being asked to make more and more appearances. But Santa Claus is getting harder to find. Mitch Allen, the founder and "Head Elf" of event planning company Hire Santa, spoke with ABC News' "Start Here" podcast about the difficulty his company is having at a crucial time of year: a nationwide Santa shortage. "People are wanting Santa more than ever before," he said. But the demand is outpacing supply. Hire Santa coordinates booking for Santa Claus impersonators across the country, as well as Mrs. Claus impersonators and Christmas elves. And Santa Claus doesn't just show up in malls; he visits homes, company parties and parades. Although   ... Read More

Online scammers don’t take a holiday, and neither should you

boonchai wedmakawand/Getty Images(NEW YORK) -- 'Tis the season for online scammers to steal your personal information. This year, scams are at an all-time high as more consumers turn to e-commerce for their holiday shopping. According to the Better Business Bureau, online scams are 55% more prevalent than scam calls or texts, and experts say the fraudsters are more sophisticated than ever. “I think in years past you had a person sitting in their parents' basement, maybe with a hoodie. Things have changed dramatically. It is an organized crime,” Tami Hudson, executive vice president and cybersecurity client officer at Wells Fargo, told ABC News. Social media is considered a gold mine for scammers, so consumers need to be especially wary of   ... Read More

Why a cap on Russian oil could send gas prices rising

Grace Cary/Getty Images(WASHINGTON) -- Prices at the pump have plummeted over the past month but a dramatic move from the U.S. and allies meant to slash Russian oil revenue and cripple its war effort could send gas prices rising again, some energy analysts told ABC News. On Monday, the European Union slapped a ban on all seaborne imports of Russian oil. On top of that, a group of Western nations imposed a price cap on Russian oil that will prohibit the country from selling crude to third party countries unless the price falls well below market rates. The Western scheme aims to choke off the primary source of funds behind the Russian war in Ukraine but the move risks disrupting   ... Read More

Mike Stobe/Getty Images(NEW YORK) -- Nike has severed ties with Brooklyn Nets guard Kyrie Irving following criticism for antisemitism. "Kyrie Irving is no longer a Nike athlete," the company said in a statement to ABC News. Irving received widespread criticism after he posted a link to an antisemitic film on Twitter in late October. The NBA star was suspended by his team in November after he and the Nets received criticism for not coming down more forcefully. Irving was suspended for "at least" five games on Nov. 3 for failing to "disavow antisemitism" when questioned by the media about the Twitter post. "We were dismayed today, when given an opportunity in a media session, that Kyrie refused to unequivocally say   ... Read More

Joe Raedle/Getty Images(NEW YORK) -- Many Taylor Swift fans expressed outrage online over the presale ticket disaster, but now some of those fans are taking it a step further and claiming the ordeal was illegal. Nearly two dozen Taylor Swift fans filed a complaint Friday in Los Angeles County Superior Court against Ticketmaster, alleging intentional deception, following major issues with the Taylor Swift: Eras Tour presale tickets, which left many fans unable to buy tickets for the singer's upcoming tour. "There is a problem with the way they're doing business, but they're really hurting the fans in how they're doing it," said Julie Barfuss, a plaintiff in the suit. The complaint asks for Ticketmaster to be fined $2,500 per violation,   ... Read More

Florian Roden / EyeEm/Getty Images(NEW YORK) -- Some unions representing rail workers as well as the nation's largest labor organization blasted a Senate vote on Thursday denying workers paid sick days after the chamber passed a separate measure imposing a labor agreement and averting a nationwide rail strike. The bill, which gives rail workers seven paid sick days, passed the House but was defeated by a vote of 52-43 in the Senate, as Democratic Sen. Joe Manchin, D-W.Va., joined Republican members in rejecting the measure. A handful of Republican members, including Sen. Ted Cruz, R-Texas, and Marco Rubio, R-Fla, voted in favor of the bill. "It is extremely disappointing that 43 Senators voted to prioritize the corporate greed of rail   ... Read More

Alex Jones files for bankruptcy after Sandy Hook $1B verdict

RapidEye/Getty Images(NEW YORK) -- Far-right conspiracy theorist Alex Jones filed for bankruptcy on Friday, less than two months after a Connecticut jury awarded almost $1 billion in damages to plaintiffs who accused Jones of committing defamation when he called the 2012 Sandy Hook Elementary School shooting a hoax. Jones, the host of Infowars, filed for chapter 11 protection in the U.S. bankruptcy court in Houston, Texas. In the filing, Jones said he had between $1 million and $10 million in assets, falling far short of between $1 billion and $10 billion in liabilities. He said in the filing that he owes money to between 50 and 99 creditors. The damages awarded in October to 15 plaintiffs -- relatives of victims   ... Read More

Disney(NEW YORK) -- Disney unveiled a new rendering of the highly anticipated The Princess and the Frog attraction, Tiana's Bayou Adventure, coming in 2024 to Disneyland Resort in California and Walt Disney World Resort in Florida. Tiana's Bayou Adventure is based on the 2009 animated film from Walt Disney Animation Studios. Anika Noni Rose, who voiced Princess Tiana, will reprise her role for the attraction, along with Jenifer Lewis (Mama Odie) and Michael-Leon Wooley (Louis) -- and a few new characters unique to just the ride, Disney announced on Friday. The new rendering of one of the ride's new distinctive scenes features zydeco-style tunes, a type of music native to Louisiana born from a special blend of rhythm and blues.   ... Read More

CPSC(NEW YORK) -- The company behind a popular line of laundry detergent and cleaning products has issued a voluntary recall due to possible bacterial contamination. The Laundress first issued a safety notice on Nov. 17, urging customers to stop using its products completely. "We have identified the potential presence of elevated levels of bacteria in some of our products that present a safety concern," the company wrote in part, before adding that it would provide an update at a later date. On Thursday, the company expanded the safety notice into a recall. "The recalled products can contain bacteria, including Burkholderia cepacia complex, Klebsiella aerogenes and multiple different species of Pseudomonas, many of which are environmental organisms found widely in soil   ... Read More

Grace Cary/Getty Images, FILE(NEW YORK) -- Gas prices nationwide have plunged to their lowest level since February as demand has dropped from peak summer travel season and the price of crude oil has fallen. Softening pain at the pump offers welcome relief for households battered by inflation that stands near a 40-year high. The national average price for a gallon of gas, which stands at $3.47, has fallen more than 30% since it reached a peak of $5.01 in mid-June, according to data AAA provided to ABC News. Over the last month alone, the price for a gallon of gas has fallen nearly 8%. In California, the state with the highest average price, a gallon of gas costs $4.90, though   ... Read More

Retro games get a new life as demand for defunct consoles, games on the rise

ABC News(NEW YORK) -- They were once coveted birthday and holiday gifts for millions of millennials and Generation Xers. They were Nintendo Entertainment System bundled with Super Mario Brothers and Duck Hunt or that copy of Pokémon Gold for the Game Boy Color. And even though those vintage game systems and cartridges are long gone from store shelves to make way for more advanced tech, the beloved games are still in high demand. In some cases, they can sell for thousands of dollars for collectors and retro gamers. "Everybody's into this stuff because this is the stuff they grew up on," Nick Pittelli, the CEO of the retro gaming store "The Game Island," told Impact x Nightline. Impact x Nightline   ... Read More

ABC News(NASSAU, THE BAHAMAS) -- Sam Bankman-Fried, the embattled former CEO of cryptocurrency giant FTX and trading firm Alameda Research, told ABC News he was ultimately responsible for the downfall of both companies, but denied that he knew "that there was any improper use of customer funds." "I really, deeply wish that I had taken a lot more responsibility for understanding what the details were of what was going on," he said. "I should have been on top of this, and I feel really, really bad and regretful that I wasn't," he said. "A lot of people got hurt. And that's on me." Bankman-Fried spoke to George Stephanopoulos and ABC News for his first network interview since both companies in   ... Read More

What a rail strike would mean for your finances

EThamPhoto/Getty Images(WASHINGTON) -- Hundreds of thousands of rail workers stand on the brink of a strike that would snarl the nation's supply chain, driving up prices for households already under strain and eventually leaving some store shelves bare, supply chain analysts and industry groups told ABC News. "Let me be clear: a rail shutdown would devastate our economy," President Joe Biden said on Monday. "Without freight rail, many U.S. industries would shut down." A strike would cause $2 billion a day in lost economic output, according to the Association of American Railroads, which lobbies on behalf of rail companies. Rail transports about 40% of the nation's long-distance freight and one-third of exports. The economic costs of a strike would crunch   ... Read More

Oscar Wong/Getty Images(NEW YORK) -- The Federal Bureau of Investigation has issued an alert about the rise in technical support scams spreading across the country. FBI field offices in Pittsburgh, Las Vegas, Boston and Chicago continue to warn the public of heightened fraud and cyber security risks. According to the FBI bulletin, the technical support scam involves a cybercriminal posing as technical support offering to resolve issues such as compromised email or bank accounts, computer viruses, or software renewals. "You may be on your computer, and you may get a pop-up," said Ashley Johnson, the acting special agent in charge of the Chicago division. "And this pop-up will tell them, 'Hey, your accounts have been hacked. Call this number.' And   ... Read More

EThamPhoto/Getty Images(WASHINGTON) -- The House on Wednesday voted to block a strike by the nation's railway workers, intervening in a labor dispute with wide-ranging economic and political implications. The House voted 290-137 to adopt the tentative deal between the rail companies and employees reached in September and brokered by the White House. In a second, separate 221-207 vote -- aimed at addressing progressive Democrats' concerns over protecting workers -- the House added seven days of paid sick leave to the agreement, which currently calls for only one. Just three Republicans vote in favor of the added paid leave. The two bills now head to the Senate. Unless an agreement is imposed by Congress by a Dec. 9 deadline, much of   ... Read More 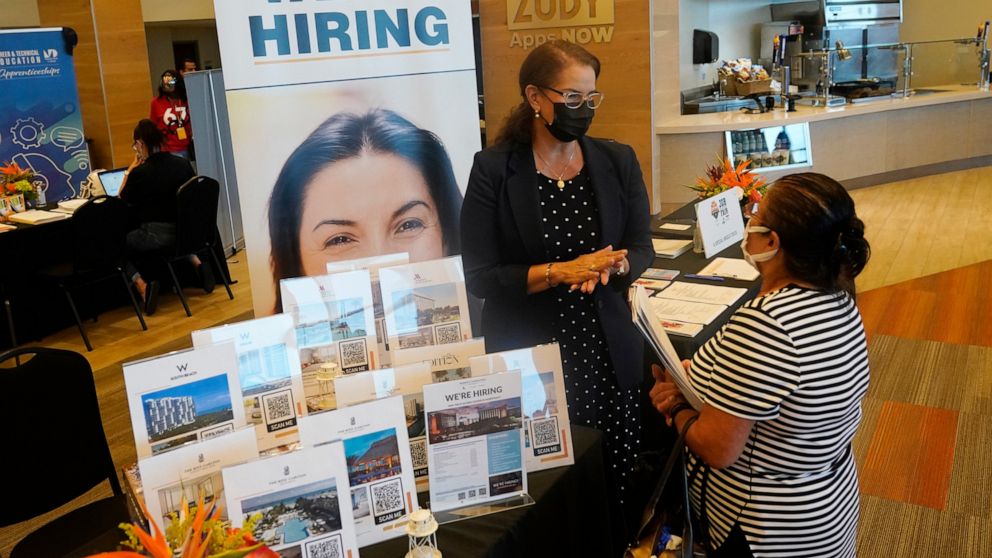 By MATT OTT AP Business Writer WASHINGTON -- The number of Americans applying for unemployment benefits last week fell to its lowest level in 52 years as the U.S. job market continues to show strength in the midst of rising costs and an ongoing virus pandemic. Jobless claims fell by 28,000 to 187,000 for the week ending March 19, the lowest since September of 1969, the Labor Department reported Thursday. First-time applications for jobless aid generally track the pace of layoffs. The four-week average for claims, which compensates for weekly volatility, also fell to levels not seen in five decades. The Labor Department reported that the four week moving average tumbled to 211,750 from the previous week’s 223,250. In total,   ... Read More
Top of page