Firearm deaths among Black men at 28-year high, doctors are taking steps to reframe gun violence as one of America’s major health crisis

DBenitostock/Getty Images(NEW YORK) -- There's been a substantial increase in firearm-related deaths in the United States over the past three decades and Black men are the most affected, according to new research from a team of emergency room doctors. They're 23 times more likely to experience firearm-related homicide than white men, the study showed. "Gun violence is an incredible scourge in our country. Gun violence affects everybody, and that's an important thing to recognize. However, it affects certain groups far more than others. Black men speak to one of the greatest disparities, if not the greatest disparity," co-author Eric Fleegler, associate professor of pediatrics and emergency physician at Harvard Medical School, said in a statement. In a study published in   ... Read More

Pediatrician and mom shares the protections she’s taking amid ‘tripledemic’ of flu, RSV and COVID-19

Dr. Edith Bracho-Sanchez/Instagram(NEW YORK) -- Dr. Edith Bracho-Sanchez says she knows firsthand the worry that comes with being a parent amid what some health experts are calling a "tripledemic," with high rates of flu, respiratory syncytial virus, or RSV, and COVID-19. Bracho-Sanchez is a pediatrician at Columbia University in New York and the mother of a 14-month-old son who had to be taken to the hospital earlier this year to be treated for pneumonia after having a viral illness. "It was really, really scary," Bracho-Sanchez told ABC News' Good Morning America of her son William's illness, from which he eventually recovered. "So in addition to relating to my patients, of course, as their pediatrician, I am relating in this moment   ... Read More

Hans Gutknecht/MediaNews Group/Los Angeles Daily News via Getty Images(WASHINGTON) -- Health officials are making another urgent push to encourage flu and COVID vaccinations, as multiple respiratory viruses swirl around the country inundating both pediatric and adult hospitals. About 75% of pediatric hospital beds are filled and flu hospitalizations are at the highest level in a decade, for this time in the season. “Levels of flu-like illness, which includes people going to the doctor with a fever, cough or sore throat are at either high or very high levels in 47 jurisdictions and that is up from 36 jurisdictions just last week,” said Dr. Rochelle P. Walensky, director of the Centers for Disease Control and Prevention during a telebriefing today. This   ... Read More

Jamie Grill/Getty Images (PORTLAND, Ore.) -- Between 2000 and 2020, reports to poison centers for child and teen marijuana use increased by 245%, according to a new study from the Oregon Health and Science University. The researchers analyzed more than 330,000 reports in the National Poison Data System over the last 20 years and found the increase in marijuana rates was the most of any substance, with the largest increase between 2017 and 2020. Alok Patel, ABC News medical contributor and pediatrician at Stanford Children's Health, said he's not surprised. "Marijuana is readily accessible, in multiple forms, whether at a store, from a friend or relative, or online," he told ABC News. Alcohol use reports slowly decreased across the same   ... Read More

EMS-FORSTER-PRODUCTIONS/Getty Images(LOS ANGELES) -- Los Angeles County may soon reimpose indoor mask mandates as COVID-19 cases and hospitalizations continue to rise in the area. During a press conference Thursday, LA County Public Health Director Barbara Ferrer said the largest county in the United States had reached "medium" COVID-19 transmission levels and will require face coverings if it reaches the "high" category. As of Dec. 1, Los Angeles County is averaging 2,490 new COVID-19 infections every day, the highest number recorded since Aug. 26, according to health department data. Ferrer said the real count is likely much higher due to several people testing positive with at-home rapid tests and not reporting the results to health officials or due to people not   ... Read More

Peter Dazeley/Getty Images(NEW YORK) -- Pumpkin seed oil, zinc and other nutritional supplements may help with hair loss, according to new research published in JAMA Dermatology. Researchers in Boston and Miami reviewed 30 different studies -- some had men participating, while others focused on women, and another looked at hair loss in children -- and found nutritional supplements with the best potential benefits from several hair loss brands and natural supplements. A few of the brands include Viviscal, Nourkrin, Nutrafol, Lamdapil and Pantogar, and potentially beneficial supplements include the likes of capsaicin and isoflavone, omegas 3 and 6 with antioxidants, apple nutraceutical, total glucosides of paeony and compound glycyrrhizin tablets, zinc, tocotrienol and pumpkin seed oil, according to the findings,   ... Read More

Suffering from flu, RSV or COVID-19? How you can tell the difference

Westend61/Getty Images(NEW YORK) -- The U.S. is facing a surge of respiratory viruses, mainly driven by COVID-19, influenza and respiratory syncytial virus, or RSV. Flu and RSV have appeared earlier than usual and have particularly affected children, leading to 78% of pediatric hospital beds being full, according to the U.S. Department of Health & Human Services. All three viruses have symptoms that are similar, which can make them difficult to tell apart. But knowing which virus a person has can help them receive proper treatment or, if need be, let them know if they need to isolate. Here are some questions to consider when trying to determine if you have COVID-19, flu or RSV. What are the symptoms? COVID-19, flu   ... Read More

Jordan Vonderhaar/Bloomberg via Getty Images, FILE(WASHINGTON) -- Health officials are warning of a "triple threat" of flu, RSV and COVID-19 across the country and hospitals are continuing to see a surge in pediatric RSV cases. U.S. Surgeon General Dr. Vivek Murthy joined GMA3 to discuss how people can best prepare themselves for the winter months, what this flu season will look like, and how the federal government is working with hospitals and health care workers across the country. GMA3: Doctor, good to have you with us, as always. I know you have to be able to walk and chew gum at the same time, but we're talking about flu, RSV and COVID. Can you give us an idea, though, which   ... Read More

Sarah Silbiger/Getty Images(WASHINGTON) -- The U.S. Food and Drug Administration is considering updating its blood donation policy, which currently places some restrictions on blood donations from sexually active gay and bisexual men. In a statement, an FDA spokesperson said, "While we can't comment on what might be in the content of the guidance, we can say that the screening policy we put forward will be gender neutral and science-based." The announcement on Wednesday was made on the eve of World AIDS Day, a day to spread awareness of and dismantle the stigma associated with the disease. Public health experts and advocates said relaxing restrictions doesn't only help battle stigma but could also help address future blood shortages. "The plan for   ... Read More

Boris Zhitkov/Getty Images(ATLANTA) -- The number of HIV tests and people diagnosed with the virus dropped significantly during the COVID-19 pandemic, according to new federal data. The report, published Thursday by the Centers for Disease Control and Prevention, looked at data from two commercial laboratories and found decreases during the first half of 2020. Between April and June 2020, in the early months of the pandemic, about 1.68 million HIV tests were performed, a 33% decline from the 2.52 million tests performed during the same period in 2019. As a result, fewer people were diagnosed with HIV. During the first six months of 2019, 18,919 people tested positive for HIV. By comparison, 14,666 people received an HIV diagnosis during the   ... Read More

Nathan Posner/Anadolu Agency via Getty Images)(NEW YORK) -- The Centers for Disease Control and Prevention announced Wednesday it will expand wastewater testing for polio to select communities across the U.S. after a person tested positive for the disease in New York this summer. The initiative will start in two communities: Oakland County, Michigan, and a yet-to-be named county in the Philadelphia area. Wastewater testing will extend to counties with low rates of polio vaccination or to counties connected to communities in New York where polio has been detected in wastewater, according to the CDC, including Rockland County, where a single case of vaccine-derived polio was detected. On July 21, the New York State Department of Health revealed a patient in   ... Read More

More than 90% of COVID deaths occurring among elderly adults: CDC

SONGPHOL THESAKIT/Getty Images(ATLANTA) -- Older people have always been known to be one of the groups at highest risk of death from COVID-19, but they now make up a larger share than ever before. As of the week ending Nov. 19, Americans aged 65 and older make up 92% of all deaths from the virus, according to data from the Centers for Disease Control and Prevention. It's the first time senior citizens have made up more than nine out of 10 deaths since the pandemic began and a drastic increase from the roughly 58% of deaths they made up in summer 2021, an ABC News analysis shows. An infectious disease expert told ABC News the data showcases the lack of   ... Read More

LISA O'CONNOR/AFP via Getty Images(NEW YORK) -- Actress Mena Suvari is opening up about her struggles with mental health in the hopes that her honesty will make other mothers feel less alone. “I struggle with postpartum every day,” said Suvari. “I remember sitting on our balcony freaking out saying, 'I have to get out of the house. I have to do something for myself, but I can't leave.'” The 43-year-old star spoke to Rachel Bilson on her podcast, “Broad Ideas,” about new motherhood and her ongoing mental health journey. Suvari married her husband Michael Hope in October 2018 and she gave birth to their son Christopher in April 2021. She said, at first, the responsibility of being a new parent   ... Read More

Virojt Changyencham/Getty Images(NEW YORK) -- Approximately 10 million adults have attention-deficit/hyperactivity disorder (ADHD), according to CHADD, a respected ADHD organization founded in 1987. Now, some telemedicine services which advertise an easy path to get evaluated for a possible ADHD diagnosis and obtain a prescription, completely virtually, have entered the landscape and some experts and authorities are taking a closer look. According to the Centers for Disease Control and Prevention, stimulants, a controlled substance, are the best-known and most widely used medications to treat ADHD. When not used as prescribed, stimulants can also be misused -- as they can be addictive, according to a report done by the Drug Enforcement Agency (DEA). Chronic misuse of amphetamines, a category of stimulants that   ... Read More

Hailey Bieber reveals she has ovarian cyst: What to know about the condition

ANGELA WEISS/AFP via Getty Images(NEW YORK) -- Hailey Bieber, who suffered a mini-stroke earlier this year, is opening up about another health complication. Bieber, 26, shared on Instagram Monday that she has a cyst the size of an apple on her ovary. "It's painful and achey [sic] and makes me feel nauseous and bloated and crampy and emotional," Bieber wrote over a photo of herself, posted on her Instagram story. Bieber also wrote that she has had a cyst on her ovary before, saying, "It's never fun." She also said she does not have endometriosis or polycystic ovary syndrome (PCOS), two conditions that can cause ovarian cysts. The Rhode Skin founder did not share any additional information about the cyst   ... Read More 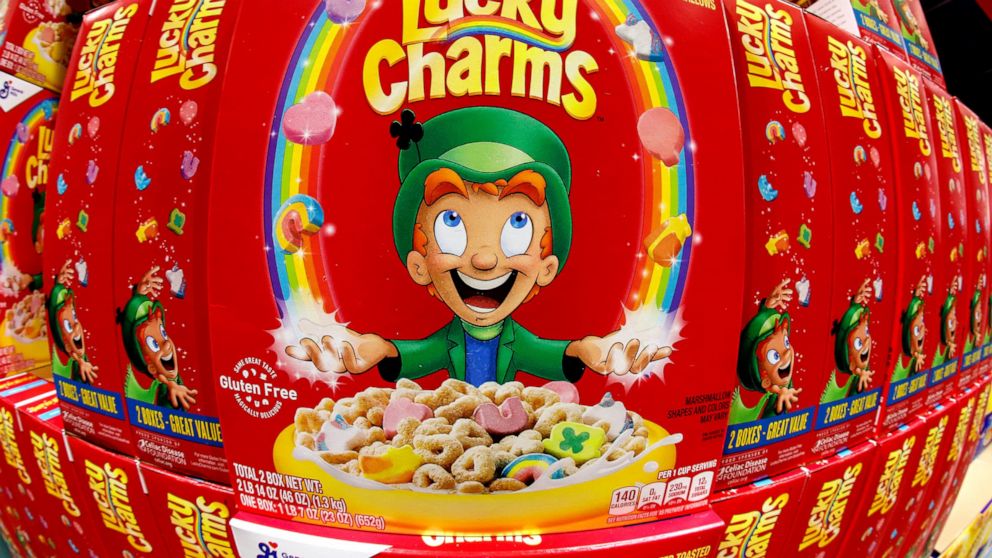 By DEE-ANN DURBIN AP Business Writer The U.S. Food and Drug Administration is investigating Lucky Charms cereal after dozens of customers complained of illness after eating it. The FDA said Saturday it has received more than 100 complaints related to Lucky Charms so far this year. “The FDA takes seriously any reports of possible adulteration of a food that may also cause illnesses or injury,” the agency said in a statement. Several hundred people have also posted on a food safety website, iwaspoisoned.com, complaining of nausea, diarrhea and vomiting after eating Lucky Charms. General Mills Inc., the Minneapolis-based company that makes Lucky Charms, Cheerios and other cereals, said it’s aware of those reports and takes them seriously. But the company   ... Read More
Top of page