Anna Moneymaker/Getty Images(WASHINGTON) -- Top lawmakers on Tuesday presented police officers who defended the Capitol on Jan. 6, 2021, with Congressional Gold Medals -- the highest honor that Congress can bestow -- nearly two years after the attack. For many officers honored, the Rotunda ceremony marked the first time since Jan. 6 that they've returned to the Capitol complex. "Many of us still carry the physical, mental and emotional scars after that mob of thousands launched a violent assault in an attempt to halt the counting of electoral ballots," said Chief Robert Contee of the Metropolitan Police Department. "The sound of metal poles and other objects striking the bodies, helmets and shields may still ring loudly -- the air, still   ... Read More

Omar Chatriwala/Getty Images(WASHINGTON) -- The House Jan. 6 committee's chairman, Rep. Bennie Thompson, indicated on Tuesday that criminal referrals related to the Capitol attack were under discussion but that final decisions -- including on specific crimes and specific suspects -- had not been made pending a vote by committee members. A spokesperson for the committee subsequently said in a statement that "the Committee has determined that referrals to outside entities should be considered as a final part of its work." "The committee will make decisions about specifics in the days ahead," the spokesperson said. Thompson, D-Miss., talked with reporters Tuesday on Capitol Hill as his committee pushes to finish its work before the next Congress begins in January and Republicans   ... Read More

YinYang/Getty Images(ATLANTA) -- Georgia's Senate runoff between Democratic incumbent Raphael Warnock and Republican challenger Herschel Walker comes to a close on Tuesday after more than a year of campaigning, several controversies and record-breaking turnout. While the race won't determine control of the Senate, it could increase Democrats' power in the chamber -- where Vice President Kamala Harris currently has to break ties -- or see the Republicans win a 50th seat and create procedural obstacles. Walker, a businessman and local football legend, and Warnock, a noted reverend in Atlanta, first faced off in November's general election. But neither got 50% of the vote as required by state law, leading to Tuesday's runoff after about a week of early voting. Here's   ... Read More

Grace Cary/Getty Images(ATLANTA) -- In Georgia, the stage is set for the final Senate battle of the midterm election as voters head back to the polls on Tuesday for the runoff election between Democratic incumbent Raphael Warnock and Republican Herschel Walker. In November's general election, Warnock finished less than 1% ahead of Walker, falling just short of the 50% threshold required by state law, triggering a four-week runoff election that included at least five days of mandatory early voting last week. Georgia is no stranger to runoff elections and this is the third time voters cast ballots in a Senate runoff election in less than two years. But the dynamics have shifted since the 2020 campaign that got Warnock elected.   ... Read More

Win McNamee/Getty Images(ATLANTA) -- Georgia Democratic Sen. Raphael Warnock is running in his fourth election in roughly two years as he fights for a full six-year term representing the battleground state. Warnock is facing Republican Herschel Walker, a businessman and college football legend in Georgia, in Tuesday's runoff after neither reached the 50% threshold in last month's general election, as mandated by state law. Warnock first won his seat in the Senate in a 2021 runoff after neither he nor then-Sen. Kelly Loeffler garnered 50% of the vote in their first matchup in November 2020. A noted reverend, Warnock -- whom Republicans have sought to cast as too liberal for the state -- has campaigned on a personal history steeped   ... Read More

Alex Wong/Getty Images(ATLANTA) -- Republican Herschel Walker hopes to do what former Sen. Kelly Loeffler could not and defeat Democratic Sen. Raphael Warnock in a runoff election in Georgia. Walker, a football legend in the state known for scoring touchdowns in the University of Georgia's 1980 championship season, will face Warnock in Tuesday's race after neither reached the required 50% threshold in last month's general election. Both the November election and the runoff have seen Walker deny a series of allegations from women, including that he paid for their abortions, which he has said is not true. He is running as a staunchly anti-abortion candidate. During the campaign, Walker's past also received new scrutiny, such as resurfaced reports about violence   ... Read More

Drew Angerer/Getty Images(WASHINGTON) -- The White House on Monday and some Republicans in Congress condemned former President Donald Trump's call for "termination" of the Constitution's rules -- while GOP congressional leaders kept silent on Trump's comment and Democrats demanded Republicans rebuke him. White House press secretary Karine Jean-Pierre, asked about Trump's comment, said she wanted to be "careful" about how she answered from the briefing room podium since Trump has declared his candidacy for 2024 but reminded that his own administration officials have called the 2020 election the most secure in American history. "It was also upheld by the Trump administration's attorney general, and by over 80 federal judges, [many] of whom were nominated by Donald Trump himself," she said.   ... Read More

joe daniel price/Getty Images(WASHINGTON) -- The U.S. Supreme Court's conservative majority on Monday appeared sympathetic with a wedding website designer challenging Colorado's anti-discrimination law and its requirement that she provide services for same-sex couples or face a fine. At the same time, the justices seemed wary about the ramifications of a broad ruling in her favor, suggesting a desire to potentially resolve the case on narrow grounds. Lorie Smith, a Denver-based designer who is Christian, says the state's public accommodations law -- mandating that businesses serve all customers regardless of their sex, gender, race, ethnicity or sexual orientation -- forces her as an artist to create messages that violate her beliefs. She has not yet turned away any customers, but   ... Read More

How Congress achieved a historic breakthrough on gay marriage

Mint Images/Getty Images(WASHINGTON) -- In the summer, Democrats were privately debating how to handle a jolt that had been sent to the more than 1 million U.S. households with same-sex couples. The Supreme Court had just overturned its own rulings on abortion rights, and conservative Justice Clarence Thomas openly mused in his concurring opinion whether the court's landmark 2015 decision on gay marriage -- which he said was based on "legal fiction" -- should be next. According to several aides on Capitol Hill, a top staffer to New York Rep. Jerry Nadler, chairman of the House Judiciary Committee, approached the office of Wisconsin Sen. Tammy Baldwin, the first openly gay senator and a longtime LGBTQ rights advocate. Should the House   ... Read More

Jon Cherry/Bloomberg via Getty Images(PHOENIX) -- Elected officials in Arizona certified the state's election results on Monday in a formal canvassing ceremony at the state Capitol, initiating the start of recounts and potential lawsuits, which couldn't begin by law until after the canvassing. Secretary of State Katie Hobbs, the Democratic governor-elect, presided over the official certification, to the outcry of some Republicans, including her competitor Kari Lake, who was expected to challenge the vote. During the campaign, Lake repeatedly called on Hobbs to recuse herself from her role, but Hobbs maintained she carried no conflict of interest since former secretaries of state have certified their own election wins and because her office does not count the votes. At the start   ... Read More

SAUL LOEB/AFP via Getty Images(WASHINGTON) -- Paul Pelosi, alongside his wife, House Speaker Nancy Pelosi, made his first public appearance on Sunday since being attacked with a hammer in his home in October, receiving a warm welcome at the high-profile Kennedy Center Honors in Washington. Pelosi, 82, who is still recovering from his injuries to his head and hands, wore a black hat and a single black glove at the John F. Kennedy Center for the Performing Arts, where he rose to his feet several times to applaud the event. President Joe Biden, seated near him and Vice President Kamala Harris in the mezzanine, threw a fist pump in the air toward Pelosi when he saw him present. Kennedy Center   ... Read More

Colorado has long been at the center of debate over LGBTQ rights. A U.S. Supreme Court decision in Romer vs. Evans, 26 years ago, struck down a Colorado amendment prohibiting protections for LGBTQ people. - ABC News(DENVER) -- Four years after the U.S. Supreme Court ruled narrowly in favor of a Colorado baker who refused to make a wedding cake for a gay couple, the justices are preparing to take up a potentially more sweeping and consequential question: whether public accommodation laws that require business owners to offer all customers their goods and services infringe on freedom of speech. Denver wedding website designer Lorie Smith, who opposes same-sex marriage, is asking the high court to strike down Colorado's Anti-Discrimination Act,   ... Read More

Bloomberg Creative/Getty Images(ATLANTA) -- Early turnout in Georgia's fast approaching Senate runoff between Democrat Raphael Warnock and Republican Herschel Walker broke daily voting records three times since polls in all 159 counties opened last Monday. Ahead of the Tuesday runoff, state officials have celebrated the historic feat. Elections experts contextualized those numbers as unusually high because of a voting period that was condensed by lawmakers as part of a larger overhaul of state elections. "Georgia is a national leader in voter access and security," Secretary of State Brad Raffensperger said in a statement last week. "We are having historic levels of turnout and those who want to vote are voting- we believe this level of voter participation is excellent, and   ... Read More

ABC News(WASHINGTON) -- Joe and Jill Biden attended the Kennedy Center Honors on Sunday evening in Washington to celebrate five individuals and groups for their artistic accomplishments. The president and the first lady first went to the annual event in their current offices in 2021, donning masks due to the COVID-19 pandemic. (Donald and Melania Trump, the Bidens' predecessors, skipped the celebration, which is customarily attended by the president.) This year, the John F. Kennedy Center for the Performing Arts honored actor and human rights activist George Clooney, singer Amy Grant, performer Gladys Knight, composer and conductor Tania León and Irish band U2. "Growing up in a small town in Kentucky I could never have imagined that someday I’d be   ... Read More

ABC News(WASHINGTON) -- Republican Ohio Rep. Dave Joyce said Sunday that he didn't want to be drawn into commenting on Donald Trump's recent call to suspend the Constitution over baseless claims of 2020 election fraud. Joyce, the chair of the Republican Governance Group, a centrist group in the House, was asked by ABC "This Week" anchor George Stephanopoulos to respond to Trump's post on Saturday on his Truth Social platform. The former president wrongly asserted that the "massive fraud" -- which did not occur -- "allows for the termination of all rules, regulations, and articles, even those found in the Constitution." Joyce initially declined to respond, saying he didn't know what Trump said on social media and that the public   ... Read More

Biden nominates 3 for Fed board, including first Black woman 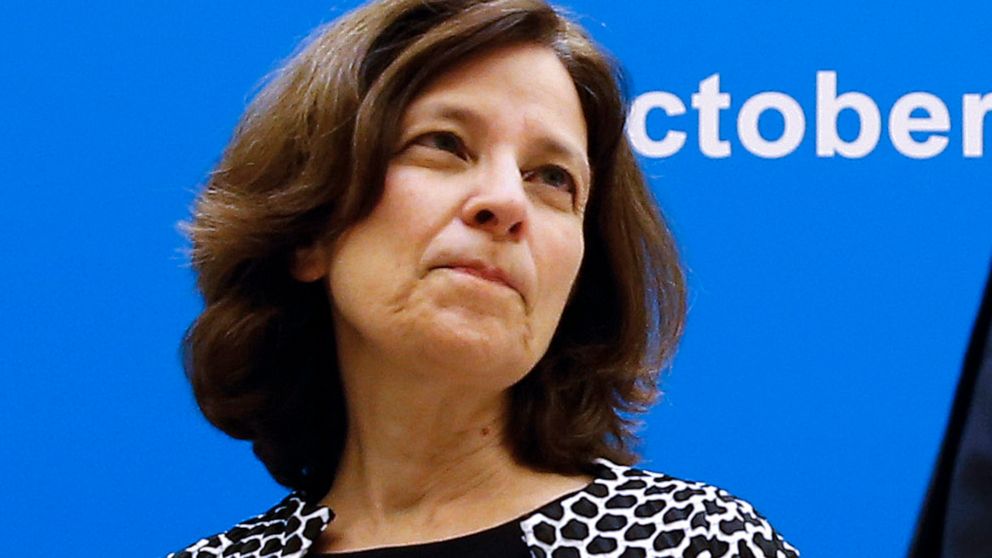 By CHRISTOPHER RUGABER AP Economics Writer WASHINGTON -- President Joe Biden on Friday announced the nominations of three people for the Federal Reserve's Board of Governors, including Sarah Bloom Raskin, a former Fed and Treasury official, for the top regulatory slot and Lisa Cook, who would be the first Black woman to serve on the Fed's board. Biden also nominated Phillip Jefferson, an economist, dean of faculty at Davidson College in North Carolina and a former Fed researcher. The three nominees, who will have to be confirmed by the Senate, would fill out the Fed's seven-member board. They would join the Fed at a particularly challenging time in which the central bank will undertake the delicate task of raising its   ... Read More
Top of page